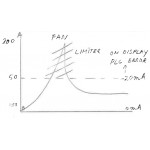 A number of ventilation fans were to be installed at a major airport in the Netherlands and monitored by a PLC based system.

The fans chosen had a normal running current of 25-30A so the system designers chose clamp on intelligent current transducers rated to produce a 0-20mA output for a 0-50A input. These transducers would then feed the 0-20mA proportional signals into the PLC analogue inputs.

The problem occurred when the fans were switched on. They sent a sketch illustrating the fact that the fans had a switch on surge current approaching 200A. During this surge period, the current transducers produced an output peaking at around 40mA, resulting in problems for the PLC. Most PLCs have an input limit of around 30mA, eg. Omron quote +/-30mA max, Siemens quote an input destruction limit of 32mA.

We suggested our SY042 loop current limiter. The PLCs needed some surge protection. This screen capture shows the voltage across a 100ohm resistor, with an SY042 in series, connected across a 24V dc supply. Each vertical division equates to 10mA. The current is clamped to 20mA with no overshoot. 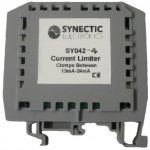 We supplied an SY042 for the customer to try. After extensive testing they were suitably impressed and ordered enough units to monitor each of the 70 fans. The fact that each SY042 contains 4 limiters in a small DIN rail case resulted in a neat and compact installation.

Your Benefits
The customer was impressed that they could discuss the application with a design engineer. While they were disappointed that they did not discover the cause before they wrote off several PLCs, they were delighted to find a cost affective solution in a very neat din rail package.
Related Product
SY042 Current Limiter
Cost effective Protection for expensive equipment, Prevent process interruption

A small, but vital, part of a winning formula